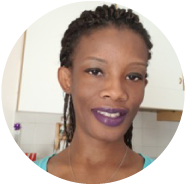 I am Okoma Marie Rose, I am Ivorian, I am 33 years old and I have GNE myopathy.  My story begins with that of my sisters. At the age of 28, my eldest sister started to have problems walking. She was working so she started doing all the exams that were possible to do, without ever knowing what she was suffering from. Then my second sister also started to have the same problems.

I started to feel a change in my walking when I was 25 years old, but I didn’t pay attention to it because I thought it was due to the frenetic life I lived.   I worked as secretary-accountant, and also operated a bar. So, after work I went to my bar and stayed there until 2am - 3am in the morning.  I slept very little.  That was when my friends, brothers, and sisters started to notice that I was walking slower, I was walking on my “tippy-toes” as if I was wearing high heels. I couldn’t stay my “tippy-toes” for hours as it was very tiring.

In 2011, during the post-election crisis in my country, I decided to go in India to do a master's degree in finances. It was there that I started to fall. I still remember my first fall ... the second one alarmed me to the point of making me decide to go see a neurologist, I was 27 years old then.  I first visited FORTIS Hospital in Bangalore. The neurologist examined me and told me that, according to my symptoms, he believed that I was suffering from CMT (Charcot Marie Tooth) and that I should to do magnetic resonance, electro-myogram and DNA examination so that he could give me an exact diagnosis. I was devastated, I saw my life flashed by. I was thinking about how will my life go, my future plans, etc.? I started with the resonance and electro-myogram.  I had already finished my master's degree and I met a wonderful man who later became my husband. He suggested that I come to Italy to do the DNA testing and be followed there since he too had finished his mission in India.

In 2013, after visiting in our city’s hospital, I was taken to Verona's Borgo Roma Hospital in Italy. I was supported and followed by Professor Gianmaria Fabrizi.  I underwent all the necessary tests, and the DNA test didn’t confirm CMT. I was still at a standstill because I didn’t know what I was suffering from. My feelings were contrasted; hope that it wasn’t the CMT, but a curable disease,  I worry because I thought the worst, that is to say, an unknown disease and therefore undetectable.

At the end of 2016/beginning 2017, after doing a muscle biopsy, my neurologist finally informed me that I had GNE Myopathy. I was relieved because he had informed me that Ultragenyx was in the experimental phase of a pharmaceutical drug.  My joy was short-lived however because in the summer of 2017 Ultragenyx discontinued their drug trial.  Now, because I know what I suffer from gives me hope that I had lost during the many years of uncertainty.

Today I live a little more serenely. My family (my brothers and sisters) don’t worry about me and don’t complain about the disease because they know that I hate moping and I have a strong moral to face of all kinds of difficulties. I use the Dictus, a walker and often a wheelchair. I live almost alone because my husband works frequently outside Italy. Most of the time my mother-in-law comes to give me a hand, but  I still prefer to fight and use the little autonomy that I manage to have, so I can maintain a fairly independent life. And, since I started hydrotherapy I get help from my sister. I try somehow to keep some autonomy even though if my sister helps me a lot. I try to organize myself at home, outside as well, and at the professional level. I work part time at an insurance company, but I have another job offer that allows me, not only to work at home so that I can manage my time, but also to be able to do physiotherapy and the projects that I am working on to organize patients of genetic diseases in Africa.

With the example of my sisters, I think I have had an incredible chance of having been diagnosed and of being able to have a more normal life socially and professionally. This is why I would like my country and all of Africa, like the rest of the world, to regroup patients, take charge of them, and provide support for them and their families.