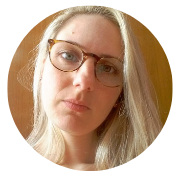 My name is Roberta Cirisyan. I live in Istanbul, Turkey. I’m 37 years old. I come from a family which includes different cultures.  My father is Armenian, my mother and grandmother are Greek and my grandfather is Italian.

My GNEM symptoms came out very quickly. Until I was 25, everything was normal; I could do everything until November 2007. Actually, there were some signals in 2006 which we realized later. The symptoms were: difficulty in climbing stairs, falling down constantly, while I was walking I felt like someone was pulling me from my back.

One day, I came home late and was climbing the apartment stairs like creeping.  My dad saw this and thought I had something wrong with my bones (like hip dislocation). I had an x-ray, nothing was wrong. Then they told I could have MS (Multiple Sclerosis).  I saw the MS doctor and she sent me to a neurologist at the “University of Istanbul Çapa, Department of Neuromuscular Diseases. Then she wanted some tests EMG, biopsy. The diagnosis of biopsy report was: Myopathy with Rimmed Vacuoles.

In 2010 I went to France/Marselille to “Timone Adult Hospital” for genetic testing and the results confirmed that I had Nonaka Myopathy, which we learned 5 years later is same as GNE Myopathy.

As all doctors I’ve seen told me that “there is no treatment for this disease”, “this disease doesn’t affect you much, you have to learn to live with this.” And such words which they threw into a 24-year-old girl’s face, I started to search “cure” by myself. On those days which I was left alone, without any suggestions, I thought that I had to exercise at a gym center and I did pilates / yoga / swimming at least 3 days a week.

2 years later, I got bored and looked for something different. I found a physiotherapy and rehabilitation center in Istanbul. On the first day of consultation, the doctors told me that that place was appropriate for muscle diseases, but later on I realized that it was mostly for paralyzed, injured and traumatized people. I went for a consultation and they gave me a programme for 30 sessions. I went there 4 days a week.  I had 2 times a week physiotherapy, 1 day hydrotherapy and 1 day they put me on a machine that made me walk itself.  After 30 sessions, I was not satisfied with my situation. As I said, the place is especially for paralyzed people, this treatment didn't work well with me. They made my muscles get weaker, by overtraining my muscles and by the hot water in the hydrotherapy session.  I quit that treatment and looked for other things to make me feel and move better.

From November 2011 – March 2013, I practiced with a trainer at home. Because I started to feel tired, I didn’t have enough energy to go to gym center after work, then walk back to home.  I was still looking for new treatment ideas from the internet when one day I saw the clinical trials website.

In 2013, I participated in a clinical trial at National Institutes of Health Hospital in Washington DC Phase I Clinical Trial of ManNAc in Patients with GNE Myopathy and

A Natural History Study of Patients with GNE Myopathy. There, I learned that we shouldn’t do hard exercises like I have done for 6 years. All were wrong and caused me to lose my muscles and made quicker the progression.

For 2 years I did nothing, I needed a break, except trying to live a normal life like going to work and going out with friends. I was able to walk with a cane, falling a lot, climbing stairs was like a torture, but still I managed to do those things without any help.

In November 2015, some relatives from Greece, introduced me to an orthopedist surgeon Dr. Stavros Alevrogiannis, who was applying a new treatment stem cell therapy. We had some consultations, then I decided to try this therapy. First session was a real boost to my body.  I was able to walk with the walker outside after 6 months. But it was not permanent, I had to redo the therapy. I did 2 more times. The other 2 sessions were not as successful as the first one. It’s a painful and expensive treatment that I ended doing therapy on and on. I’ve started to exercise only with my physiotherapist since then.

My main aim now is explaining to people who are diagnosed with muscle diseases what they can do without wasting their muscles and forwarding them to the right places because I want all of us to live normal lives. I have done many incorrect things because I was left alone by my doctor; I was misdirected. As this disease has taken my abilities day by day I need to be useful, this is an important way that I may be helpful to people.